Types Of Properties In the UK

A Guide To The Different Types Of UK Properties 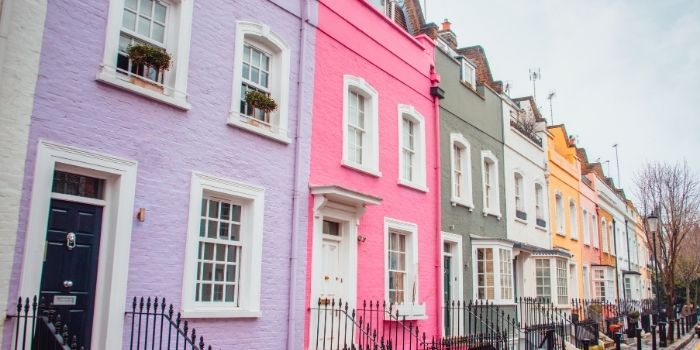 There are different types of residential properties in the United Kingdom. However, not all may be suitable for your unique requirements. Here are the most common variants and the bespoke aspects of each so that you can make an informed and educated decision at the appropriate time.

It is estimated that there are more than 25 million residential properties throughout the United Kingdom. From detached homes and flats to bungalows and cottages, you have a host of fantastic options at your disposal. There is no doubt that finding the most appropriate structure for your needs can be a bit tricky. You should consider each houses’ characteristics and see which best suits you and your family before committing to a decision about what type of property you would like to buy. The types of houses vary in size, design and value.

So, what types of houses are there in the UK?

The flat is a self-contained housing unit that occupies only part of a building. There is no doubt that flats are the most well-known types of homes in the UK and the most affordable type of housing in the UK. Flats are most popular in more urban areas because they save a lot of space and provide accommodation for many people within a single building.

This is probably the most misused of all property terms, yet there’s a simple rule that defines a true maisonette: it must have its private entrance that opens directly to the outside world. So, there’s no indoor communal area with a maisonette.

Frequently two-storey affairs, as opposed to the single-level flat. This is where a lot of the confusion comes in, as some purpose-built flats have two-storey homes within their blocks, but their front doors open out onto communal corridors.

A bungalow is a one-story house, cottage, or cabin. Bungalows are generally small in square footage, but it is not uncommon to see huge bungalows. Bungalows were initially designed to provide affordable, modern housing for the working class.

There are various types of bungalows, including raised bungalows that have basements partially above ground to let in additional sunlight.

Bungalows are small and easy to maintain and are therefore great homes for the elderly or people with disabilities. They are also cost-efficient; heating and cooling costs tend to be lower, and the property value tends to remain relatively high.

If I asked you to close your eyes and imagine a cottage, what would you picture? Would it be a cosy wood-sided house in a beach town, or a quaint thatched-roof home in the English countryside, or maybe a Tudor-style house straight out of a fairytale? Well, none of those images is technically wrong, even though those houses are quite different. The word cottage has been around for a long time, and it’s come to describe a category of house, not one specific architectural style.

A cottage is typically a small house. It may carry the connotation of being an old or old-fashioned building. A cottage is usually a modest, often cosy dwelling in modern usage, typically in a rural or semi-rural location.

Initially, a cottage was the simple home of a medieval cotter or agricultural labourer. Modest in scale, it would have had two, perhaps three, bedrooms upstairs and one or two rooms downstairs. Windows were generally mullion or casement in style and remained so when, from the 17th century onwards, sash windows were installed in more extensive, grander houses.

Cottages were usually constructed in style known as post and beam, which gives them their distinctive low ceilings.

In architecture and city planning, a terrace or terraced house is a form of medium-density housing that originated in Europe in the 16th century. A row of attached dwellings shares side walls.

These are some of the most well-known and iconic housing types within the United Kingdom. The main advantage here is that this type of construction saves a great deal of space. This is why they are pretty popular within urban districts where land is at a premium. The prices of these properties are also somewhat lower because front or back gardens are sometimes absent from their design.

The end-terraced or end-of-terrace house is a house attached to just one neighbour that in its turn is attached to two neighbours. Although in common with the semi-detached house, it has only one neighbour, it is classified thanks to the terraced status of that neighbour differently.

End-of-terrace houses tend to be slightly more expensive than terraced houses for their size and location due to having no neighbours on one side, but cheaper than semi-detached houses. In some cases, they will have private access around the side that lacks a neighbour, while in others, the side wall will immediately give onto a road.

The term ‘semi-detached’ refers to a house connected to another property on one side, as opposed to a detached house that stands alone or a terraced house that forms part of a row of properties. Designed by John Shaw and his son during the 19th century, the semi rose to prominence during the British housing boom of the 1920s and 30s when it became the preferred form of housing for the middle class and a staple of British suburban life.

They remain the predominant property type in the UK, comprising 32% of UK housing transactions and 32% of the English housing stock. They provide more privacy and space for buyers than terraced houses but at a much more affordable price than detached houses.

A typical detached house will have its driveway and garage. It is also much more likely than any other type of property to have a substantial garden area, though detached homes built during or since the 1980s tend to be on much smaller plots than earlier ones.

Detached houses give you the advantage of not sharing party walls with neighbours, which means you should be able to make more noise in your property without attracting complaints. At the same time, if you prefer peace, you should hear considerably less indoor noise from your neighbours.

The main disadvantage of detached houses is that they are much more expensive to buy than all other types for the amount of floor space you get.

A mansion is a large dwelling house. The English word manse originally defined a property large enough for the parish priest to maintain himself, but a mansion is no longer self-sustaining in this way.

A mansion is the most prominent house of them all. This house is also the most expensive out of all the different types of houses in the UK. The typical mansion consists of multiple large rooms, many floors, and a huge garden composed of many land acres. If you’re lucky enough to own a mansion, you will most probably have a pool. Often known for their spacious nature and rich history, some of these structures are centuries old.

All of these types of properties offer their unique benefits and attributes. Choosing the right property type can be difficult as there are pros and cons to all kinds of housing. It is essential to be familiar with all the different types of houses to decide what your next home should be.

Things to Consider When Deciding Between Flat or House

When researching what type of property to buy, there are many factors to consider, but the biggest of all is deciding on whether you want a flat or house. So, in this blog post, I hope to help you.

How will coronavirus affect the property market

Thank you, your enquiry was successfully sent.

There was a problem sending your enquiry, please try again.

Thank you, your enquiry was successfully sent.

There was a problem sending your enquiry, please try again.